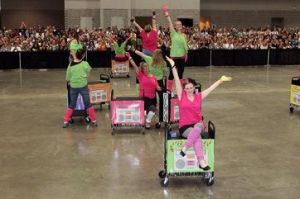 WHAT SPORT demands the precision of synchronized swimming and the book smarts of a librarian?

Book cart drills, of course, the choreographed routines performed by librarians and graduate students in library science. The activity was popularized in the mid-2000s by Demco, the book-cart manufacturer, which sponsored a world championship competition at the American Library Association’s annual conference for several years.

These days, the action is at homecoming parades and state conventions; library associations in Texas and Massachusetts are planning competitions for their conventions this spring.

Why? Drill teams promote the library and build morale and teamwork, explains John Ison, who hosted competitions before retiring from Demco.

“It’s harder than it looks,” says Janelle Wertzberger, director of reference and instruction at Gettysburg College’s Musselman Library. “You have to have hand signals and visual cues to keep everybody together.”

A signature Gettysburg move: the pinwheel, in which 10 carts line up, five facing forward and five backward, and pivot around a center point like a propeller. Gettysburg won the bronze cart in the 2010 world championship.

The University of Wisconsin, Madison, won the gold in 2005 and the bronze in 2006. For the homecoming parade this past fall, Lindsay Anderson, a second-year master’s student at Madison, helped choreograph a routine set to M.C. Hammer’s “You Can’t Touch This” and other early-’90s tunes.

Where did she get her ideas?

“I checked out a book on book cart precision drill teams from the library.”

Read this article at the New York Times.