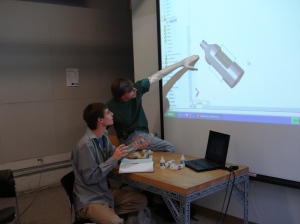 Peter Zummo, a senior double-majoring in design and mechanical engineering at Rensselaer Polytechnic Institute, is used to explaining the products he thinks up for his studio-class assignments. But last spring, he found himself answering questions of a different kind in a conference room at Rensselaer’s office of technology commercialization, which tracks and patents inventions made on campus.

Mr. Zummo and his classmate Matthew Naples, who was attending the meeting via speakerphone, had designed a water bottle that could be filled with sand and reused as a brick to build housing in developing countries. The director of the office, Charles Rancourt, sitting across the table from Mr. Zummo, wanted to know: When had they come up with their design? Had they held brainstorming sessions on campus or off? What equipment had they used to produce their prototypes?

Colleges and universities own the ideas and technologies invented by the people who work for them, including professors and graduate students who are paid to do research. Most universities also own inventions created by students using a significant amount of their resources, even if the inventors are undergraduates like Mr. Zummo and Mr. Naples, both 21.

The question of whether the two students or R.P.I. owned their invention was a tricky one. They had first designed plastic bottles that snapped together, Lego style, with two other students for a freshman design class project that challenged them to solve a social problem. Their idea was to keep the billions of water bottles that people in developing nations throw away each year out of landfills while providing the poor with free building materials. They presented a paper and a prototype in class, but “it was a crude concept, and we never really hit our goals with our first rendition,” Mr. Naples says.

As juniors, he and Mr. Zummo decided to tinker with the design again on their own (the rest of the original group didn’t want to join them), brainstorming off the Troy, N.Y., campus and interviewing bottle manufacturers about the molding process and materials. They developed a new design that was cheaper to manufacture and could withstand more types of stresses than the first.

With entrepreneurship booming, especially in courses that mix M.B.A. candidates with budding physicians or engineers, more and younger students are coming up with ideas that have commercial potential. While formal programs offer classes in managing intellectual property, plenty of students develop their ideas with little knowledge of how ownership is determined or the pros and cons of involving the university.

“Universities want to get whatever revenue streams come out of inventions so they can build more labs, have more research going on and hire more professors,” says David Schwartz, executive editor of Technology Transfer Tactics, a newsletter for people working in the field. Lisa Rooney, director of Ohio University’s tech transfer office, notes another interest: “Most universities have a broader economic mission to help out their communities and states, and licensing or starting new companies is a way to do that.”

Colleges and universities obtained fewer than 250 patents a year before 1980, when the Bayh-Dole Act gave them ownership of inventions developed through federally financed research. Now they acquire about 3,000 a year, according to the Association of University Technology Managers, whose members work in tech transfer offices. In 2006, association members made $45 billion from licensing fees and equity in spinoff companies; research powerhouses like Stanford and New York University made $61 million and $157 million, respectively.

University help can be a boon for student inventors, too. A third to half of the money generated by a product is typically assigned to the student, with the rest split between the student’s department and the university. That’s a better deal than the zero percent collected by scientists working for corporations. And universities cover the legal fees involved in obtaining patents on inventions they own, which can easily total $15,000 a patent.

“You can imagine a 20-year-old who develops something isn’t going to have access to venture capital money or the expertise to patent it,” Mr. Schwartz says. “The tech transfer office can find the resources to move it forward.”

Of course, the offices negotiate deals that are best for the university, notes Peter Corless, a partner at the law firm Edwards Angell Palmer & Dodge in Boston. He specializes in protecting biotech and medical device inventions at academic institutions. “If they can, they’re going to give some deference to the inventor, but their first allegiance is to do something for the university,” he says.

Erez Lieberman, a 28-year-old graduate student doing federally financed research at the Harvard-M.I.T. division of health sciences and technology, discovered this tendency after the Massachusetts Institute of Technology pushed through a patent on a technology he created as an intern at NASA in the summer of 2007. His algorithm detects whether a person is standing correctly or is off balance, and Mr. Lieberman, currently in the sixth year of his Ph.D. program, has started a company called iShoe to develop products using the technology, including insoles that can help prevent elderly people from falling. Because M.I.T. is co-owner of the invention with Harvard and NASA, Mr. Lieberman knew he would have to negotiate a licensing agreement that would give his company exclusive rights to the technology, but he was taken aback by M.I.T.’s tough negotiating stance.

“I wasn’t aware of the fact that more or less the day after the patent was filed, I would be facing a conversation like, ‘We take a substantial royalty and $75,000 now, and it’s all yours,’ ” he says. “That was a surprise.”

Jack Turner, associate director of M.I.T.’s tech licensing office, says: “We endeavor to get what we think is a fair deal for M.I.T. and the inventors and for the companies we’re licensing. At the same time we don’t want to license something exclusively to someone who’s going to end up not doing anything. We write into the agreement those elements of the business plan that we consider essential for the technology to find its way into use. If they can’t do that, we can get the technology back and find another home for it.”

Ultimately, Mr. Lieberman says, the fact that M.I.T. doesn’t automatically kick the license to an inventor is for the best. “It enforces discipline on you,” he says. “The process has been valuable for us in terms of thinking hard about what needs to happen, how do we raise money and what kinds of milestones make sense.”

He’s hopeful that he can raise funds for the license through angel investors or a joint venture with a hospital. But now that he knows how expensive and complicated the licensing process is (not to mention having to check in in the future to show he’s on track), Mr. Lieberman is avoiding using university resources as he develops the technology further. Last summer he paid an engineer and a computer programmer through iShoe to work off campus to improve the design of his insole and write software that lets it communicate with wireless devices. Using $25,000 worth of legal services he won in April in a business plan competition for space-derived technologies, he has filed for two additional patents, owned by iShoe, based on their work.

If a student has money to develop and protect an invention on his own, should he? It depends. Turning the job of commercializing a product over to a university is a better bet if you have no interest in business or if finishing school is a priority. “The mission of a student is to research, get their degree, and move on with their life, and if you start fooling around with this stuff too much, it’s a total distraction,” says Peter Corless, the intellectual-property lawyer. But if retaining control over an idea is important — say, you don’t want your technology licensed to a company that pollutes oceans — the expense and hassle of doing it yourself might be worth it.

Lone-wolf inventors should get a written statement from their university confirming they own their idea, Mr. Corless advises. “You want to get these things cleared up when there hasn’t been a lot of value recognized,” he says. “If you try to clear things up later, people’s memories change.”

R.P.I. determined that the bottle design belonged to Mr. Zummo and Mr. Naples. The university offered to patent the bottles and get them into the market if they transferred ownership of the design to the university. The students chose to go it alone, deciding that the standard slice of royalties R.P.I. gives to inventors, 35 percent, was too low. An intellectual property lawyer who’s a friend of Mr. Zummo’s family waived his fees to help them file a provisional patent, and the students started looking for ways to raise $18,000 to mold several hundred actual bottles they can test and show to companies interested in licensing the technology from them.

They’re not flying entirely solo, though. Last month, the university determined that while the students own the design, R.P.I. owns the idea for the bottles. The students must license it from them, at a cost of about $250 a year and 25 percent of the profits generated by the idea. That, though, comes to only 0.5 percent — an “idea” being worth less than the “design.”

“What we’re giving up is obviously nothing, and if someone infringes on our rights, now it’s R.P.I. against them,” Mr. Naples says.

The bottle negotiations helped convince R.P.I. to rethink its royalty-sharing policies for students in studio courses: it’s now 75 percent for the inventors, 25 percent for the university. For one, the university recognizes the distinction between the ideas coming out of undergraduate design classes and those coming out of a research center or lab, Mr. Rancourt of R.P.I. says.

“Given the early stage of development, a significant amount of work needs to happen to prove the idea,” he says. “At the same time, they have real potential, and our goal is to encourage them.”

Read this article at the New York Times.